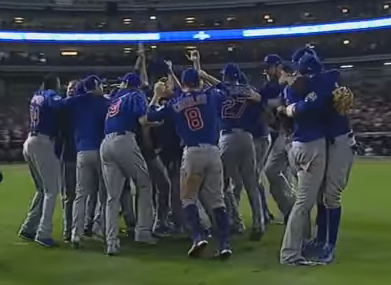 108 years.
That is a long time for anything to happen, much less an annual event. But the Cubs, for the first time in 108 years, won the World Series against the Cleveland Indians, who also haven’t won the World series in a long time. But it didn’t surprise me for a second that the Cubs won, and there are a couple good reasons why.

On the night of game seven of the World Series, I watched right up until the Indians tied it up 6-6. By that point I went to bed because I had to wake up at 6:30 the next morning. But the whole night I was lying in my bed thinking “God, are the Cubs really gonna win?” So I thought really hard, trying to simulate the rest of the game and who would win. After some time I got three really good reasons why Chicago should win.

The first main reason was Theo Epstein. I really liked Theo Epstein from the moment he was hired by the Cubs because he wasn’t afraid to get stuff done. Really. A while back, I got a 2009 Chicago Cubs complete set of baseball cards. None of those players are still on the Cubs. One of those players is Aramis Ramirez. Ramirez was a veteran player and considered a successful third baseman. He was released to make space for Kris Bryant.

My second reason was the throwing powerhouse that Aroldis Chapman is. Chapman averages 100 mph when pitching. Humans were not made to deal with anything going more than fifty miles per hour! The fact that he can throw that fast is amazing! Needless to say, such a pitch is not easily converted for a hit. Chapman was already responsible for pitching the Cubs into the World Series for the first time in over seventy years. Chapman, who pitched for the Yankees and Reds, has been known to shut down the opposition. Thus, I had a hard time imagining how the Indians could do much against him.

My final reason for thinking that the Cubs were going to win was their momentum from the time they were down in the series three games to one. Once they won that second game and then the third, it was going to be a challenge for the Indians to bounce back. While there are lots of fair controversy about this, it is hard to tell yourself that you can beat a team that defeated you twice. The Cubs knew that they could beat the Indians and they went and did it. It just goes to show that if you think you can beat them, you’re probably right.